Block foundation repair is more common than most people realize. Concrete block foundations that are about 8-feet tall have a history of developing horizontal cracks about 4 feet up from the floor. You rarely see this happen in cast or poured concrete foundation walls.

It's important to realize the reason the cracks develop. Rarely are concrete block walls filled solid.

The average concrete block that measures 8 inches high, 8 inches thick and 16 inches long has two giant void spaces inside the block. There's a center web that connects the two flat faces you see on either side of the block. Two additional webs are at each end with ears that end up creating a narrow void space between two touching blocks. You can see the hollow cores of concrete block under the horizontal PVC drain pipe. It's a far cry from a poured concrete wall! Copyright 2017 Tim Carter

Another key point is the only thing holding the block together is a thin 3/8-inch mortar joint.

While the concrete block may have been made well and is very strong if cured and there's enough Portland cement in the mix, you can't say the same thing for the mortar the block masons used.

The mortar could have these defects:

The bottom line is the mortar is the weakest link and you only have a narrow 1-inch strip of it to resist horizontal pressure from the soil pressing against the wall.

If you’re interested in learning more about cost estimates for foundation repair I have an article here.

A cast or poured concrete foundation wall is solid. It's usually 8 inches thick. It takes far more horizontal pressure to crack or snap a wall like this.

To repair a hollow concrete block foundation, one of your options is to transform it into a solid wall every 24 inches on center. Here's a typical block foundation wall in the early stages of failure. The red arrow is pointing at a crack in the horizontal bed mortar joint between two courses of block. Pressure on the other side of the wall from the soil is pushing the wall inwards. The result is a bending force much as you'd snap a twig or thin saltine cracker in two. Copyright 2017 Tim Carter

The easiest thing to do is to fill the void spaces with  concrete when a new block foundation is being built. In addition the concrete must contain small stones no bigger than a green pea.

This gravel is commonly called pea gravel for the obvious reason. It could have been called jaw breaker concrete too as that hard candy I remember as a kid was about the size of a larger green pea. But I digress.

It's easy to fill the voids and it doesn't take long if you can spot a ready mix concrete truck around the foundation. If you can do this building new, you want to fill all the void spaces with the pea gravel concrete.

Doing this, your concrete block wall now is as close as possible to a poured or cast concrete wall.

Steel Rebar In The Block Cores

Insert a 1/2-inch piece of rebar down into the wet concrete every 24 inches on center to get the strongest possible wall. It's best if this steel has a connection to the poured concrete footing. This would require steel rods being installed in the footing when it was poured.

It takes great skill to put these steel rods exactly where they'll end up in the center of the concrete block void spaces. The steel rods project up about 2 feet from the top of the footing. The rods that are installed in the block overlap these shorter rods.

Do the same thing to repair an existing concrete block wall. The problem is it's much harder to accomplish because the top of the block is covered by the house structure.

Block foundation repair starts on the outside. Every 24 inches you have to break into the concrete block to expose the void spaces between the webbing.

You then create some sort of funnel to pour the pea gravel concrete into this hole. It's not easy. You should also install the steel rod, but you may find it far easier to use a #3 bar that's only 3/8-inch in diameter. It will be easier to push down into the void spaces at an angle. 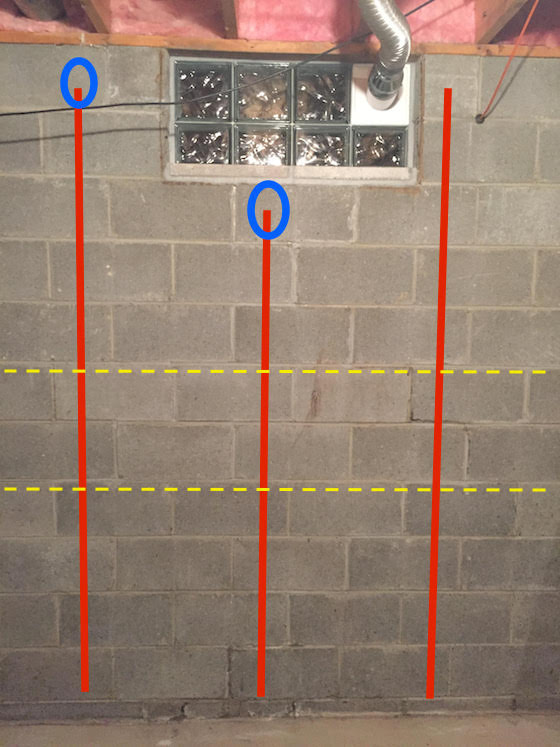 There's lots going on in this photo. The red lines represent where you'll find the hollow cores in regular block. The blue ovals are where you'd break into the block on the outside so you can fill the voids with the pea-gravel concrete. I only put in two ovals. You'd need to crack into the block every 24 inches. The dashed yellow lines are the most common locations where you'd see the foundation start to fail - the horizontal bed mortar joints between 3 and 4-feet up from the basement floor. Copyright 2017 Tim Carter

There's another method engineers use to repair bowed block foundation walls. You can install vertical small I-beams that support the bowed block walls.

You need to break into the concrete slab in the basement to hold the bottom of the beam. The top of the beam is held in place by a small angle iron that's bolted to the underside of the floor joists.

A point often overlooked are giant steel plates inside the foundation. This system resembles a massive washer you might put behind the head of a bolt.

A giant steel rod passes through the wall and is buried in the soil outside. The end of the steel rod indoors has threads on it.

The long massive bolt connects to a massive steel anchor in the ground. Tighten the nut on the end of the rod to pull the block tighter against the soil outdoors

Watch this video to see how soil anchors are installed.

These work best if you excavate the soil outside the foundation wall and put in the anchors. There's less pressure against the anchors and plates if you do this.

If you go to all this work, you may as well clean off the block wall, put in excellent waterproofing like Tuf-n-Dri as well as a great foundation drain tile.