DEAR TIM: I recently moved into a neglected house. While working on the landscaping in the front yard, I discovered that the top of the foundation was below grade. Two courses of brick on top of the foundation were covered by a mixture of dirt and mulch. What’s your opinion about how much mulch one can put up against a foundation? There are no leaks in the basement at this time, but this just doesn’t see right to me. My lot from the house to the street seems flat to me. What can I do? What should have been done when the house was built? Laura E., Sterling Heights, MI

DEAR LAURA: Your problem is but another example of how hard-earned knowledge accumulated over decades by older builders transforms from history to legend and then finally to myth. This same exact progression was mentioned early in the Lord of the Rings book by J.R.R. Tolkien when he was speaking about how the magic ring came to be forgotten for two and a half-thousand years.

All one has to do is walk through older neighborhoods in just about every major city east of the Mississippi river to see how builders of old knew all about why the top of a foundation should never be near the soil line or grade. Look at houses that were built in the late 1800’s or early 1900‘s.

You’ll quickly notice that the top of the foundations of these homes almost always sat a good 30 inches or more above the grade. The houses had wood basement windows and the bottom of the basement window sill was about 6 inches above the level of the surrounding soil. 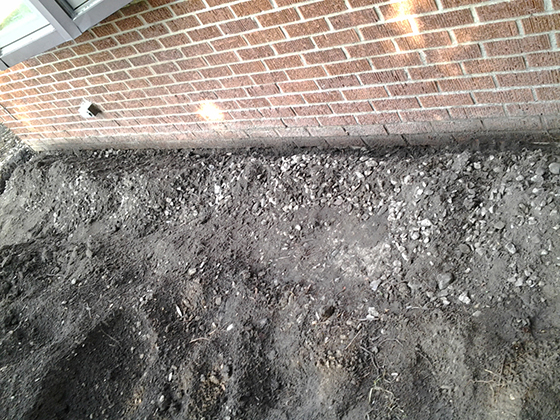 You can see the two stained rows of brick that were covered by mulch and soil. Photo credit: Laura Elsee

This method of construction allowed light into basements and helped preserve the wood that was used to build the house. The wood framing was far away from splashing water and creeping damp. Creeping damp is simply the phenomenon of water being pulled up through masonry construction against the tug of gravity by water’s capillary attraction.

For some odd reason, builders tend to ignore or forget what the builders before them discovered. Some of this happens because many builders, and people in general, take their knowledge with them to the grave. They don’t take the time to write down what they’ve learned over thirty or forty years. It’s not important to them for whatever reason.

If you look at the building code, realize it’s not only a collection of minimum building standards but it’s a moving target as it’s in a state of near constant change. Codes from not too long ago said that you need at least 6 inches of foundation showing above the grade. What’s more, you need at least 6 inches of fall in the soil in the first 10 feet of horizontal distance away from the house. Remember, this is a minimum standard.

I used to make my foundations, when possible, about 18 inches higher than the surrounding grade. Using the dirt I dug from the basement, I then was able to make a long gentle slope away from the foundation so that the ground around the house appeared level, or nearly so. The builder who built my wife’s childhood home did an excellent job of this. This house sits about 70 feet from the curb of the street and the front yard looks dead level.

Guess what? It has about 24 inches of fall over that distance! I know because I checked it one day using a very accurate builder’s level transit. Your builder should have done the same and it’s possible you have quite a bit of fall now, but your eyes are playing a trick on you. Get access to a laser level or transit and check to see how much fall you really have from the top of your foundation to the city sidewalk or street curb.

If you can’t get your hands on one of these precision instruments, you can use a standard 4-foot level and some wood stakes of increasing length with a flat top. Using these things and a four-pound hammer, you can start to determine how much fall your front yard has from your house to the street.

Repeat this procedure using longer and longer stakes until you reach the street curb. If you did everything right, the height of the last stake sticking out of the ground closest to the road tells you how much your lot has fallen away from the house as you get closer to the roadway. My guess is you’ll be shocked at how much fall there is.

The other thing to watch for is creating a depressed area between your home and any sidewalk that leads from a driveway to your front door. All too often I see ponds in between these sidewalks and the house because the sidewalk acts as a dam not allowing surface water to drain away.

The best way to prevent all these issues is to keep the top of the foundation at least 18 inches above grade. You can even go up as much as 24 inches. Creative planning then can make it so there are minimal steps to get up into the home.

As for as how much mulch one should put up against a house foundation, I say use the minimal amount. Keep in mind that during dry spells the mulch can be flammable and cause a house fire if it somehow ignites.

5 Responses to Mulch Against Foundation