In the center of this gravel is a linear french drain. Some call them trench drains as I dug a trench and put in a perforated pipe. This area never has standing water in it now. Copyright 2017 Tim Carter ALL RIGHTS RESERVED

Last year, I did some consulting work for one of my readers here in Cincinnati. She had a massive drainage problem in her rear yard. Half of the neighborhood's water was flowing through and over the soil into her backyard.

Her basement was leaking, the yard was soggy, and she had flooding in heavy rains.

I assured her it would work. She indicated that it had better as she intended to hand dig the system. I gave her a handy tip on digging trenches and even let her borrow my duckbill shovel. This tool and a handy square point spade are the only shovels to use when digging trenches.

Why A French Drain Works: 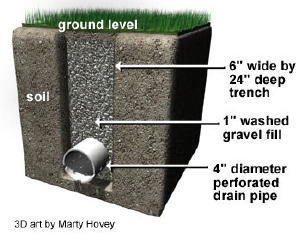 Cross-section of a Linear French Drain including the all-important perforated french drain pipe. Copyright 2017 Tim Carter ALL RIGHTS RESERVED - Do NOT COPY this graphic.

How a French Drain Works Video

My French Drain Stopped the Water

Eight weeks ago, I received the most wonderful Thank You note in the mail. We had a somewhat wet winter with several periods of heavy rain.

My french drain system captured and diverted all of the surface and sub-surface water. Her basement was dry and the yard allowed you to walk in it without leaving a shoe behind! She mentioned in the note that water rushed from the outlet portion of the linear French drain like a fire hose. Needless to say, she was satisfied and most grateful.

The woman who I am speaking of built the entire system without any help. I visited the job site to inspect the trench after the pipe was installed. She dug over 165 linear feet of trench by hand (working part-time) in 2 months. It was hard work, but she accomplished the task.

You can often do much of the work with a trenching machine. These handy devices can be rented at a tool rental shop and towed behind any car.

Most tool rental places will even deliver it to you. However, even with a trenching machine you still must do some work by hand.

The trencher does a majority, that is for sure! If you decide to use one, purchase a sheet of 4 x 8 1/2 inch plywood.

Rip the plywood in half lengthwise to yield two pieces 2 x 8 feet. The trencher discharges dirt to one side of the trench while digging. Place the plywood on the ground so the dirt piles up on it, not the bare grass.

If your trenching system requires different bends and turns to go around houses, sheds trees, whatever, then your layout is critical. If you do not dig the trenches properly, the pipe will not fit into the fittings that go around the bends.

I always dry fit my pipe and fittings together and lay them on top of the ground exactly as they will be installed. I then use a can of bright orange spray paint to paint the grass right next to the pipe. Always paint on both sides to make sure that you clearly mark the center of the trench. This layout will save you hours of extra digging!

Location of the French Drain Piping

If you want to dry out a leaking basement or a crawl space, then you must locate the linear French drain in such a way as to capture all or most of the sub-surface water that is flowing towards your house. If you have periods of flooding where surface water flows over your lawn, then the drainage system must extend to the surface to capture this water.

Linear French drains that are intended to stop water from entering a house work best if they're located approximately 4 - 6 feet away from the foundation. It's not necessary or recommended that they be placed closer to the house.

You want the piping in soil that was not disturbed during the construction of the house. Placing the piping too close to the house also concentrates water flow at the foundation!

Linear French drains do not need to be excessively deep to be effective. Remember, water movement through soils happens where there are air voids. In many soils, air is most plentiful in the upper 24 inches.

You want to install the piping system so that the pipe is level or has a slight downward slope to the discharge point. Do not install the pipe at a consistent 24-inch depth if your lot goes up and down. Doing this will trap water in the low spots of the pipe.

If your lot is rolling in nature, then you will have to use a builder's level or laser to make sure your piping is level or flows downslope. Do not underestimate the importance of this!

Use the Right Pipe

The pipe used to collect water from the soil must be perforated. Once collected and in transit to the discharge point, you can switch over to solid pipe. Only use perforated pipe in the areas to be drained.

I happen to prefer the PVC pipe that has two rows of holes in it. These holes must point down.

Pointing them up is not right. Do you think the water flowing through the gravel aims for and enters the holes? Wrong! Some water may go in the holes but the majority goes past it and simply saturates the soil until the trench fills with water to the height of the holes.

Once you have placed the pipe in the trench, fill around the pipe with 1-inch washed gravel to within 1 or 2 inches of the surface. The best gravel is about the size and shape of a large grape.

Cover the gravel with a piece of sod. Do not place any dirt in the trench. Water traveling through the soil will find this gravel and immediately fall down to the pipe. The large voids around the 1-inch gravel will accommodate a rapid flow of water.

If you have to bring the trench system to the surface to capture surface water, dig out soil to make a path. Use colored gravel for the path placed around fieldstone or stepping stones. It will make a unique attraction and landscaping feature in your yard.

have tried everything. Several contractors said that the only thing we could do was to bring the water into the house via drainage tile and let it enter the sump pump. That would work, but because I live on a 6' elevation, there is no reason that I should have water problems. It became like clockwork...when it rained, we would rush home from the lake or wherever we were vacationing so that we could be prepared to start the backup generator, in case the power failed. We even had our alarm company put a sump alarm on our system, so they could notify us if we had a power failure. Battery backup was not an option, because sometimes we lose power for days and during any rain, our sump would run every 7 minutes...just like clockwork.