Here are several tape measures. You can see the vast difference in markings. Some are easier to read than others! Photo credit: Tim Carter

Tape measure markings are black lines that represent fractions of an inch. The length of the line gives you a clue as to the fraction. Special markings are for different on-center measurements.

DEAR TIM: I'm just starting to get into building and remodeling as a do-it-yourselfer. Now that I'm using a tape measure, I'm having some difficulty.

Perhaps I should have paid more attention in math class in school. Can you tell me about the markings on tape measures, what they mean and about all the special markings?

Also, every tape measure I have and see in the store seems to be defective. The hook on the end is loose on all the tapes. The manufacturer is not tightening the rivets enough. What other tips do you have about using tape measures? Craig S., Billings, MT

DEAR CRAIG: I've got some sobering news for you. As you delve deeper into building and remodeling, you're going to really regret not paying more attention in all your math classes, especially geometry.

Math skills are very important. Fortunately, it's never too late to master mathematics. If you possess the passion to build and remodel, you'll get up on the math learning curve very fast.

I've been using tape measures for so many years that I've had the great fortune to see some that are worthless and others that are marvelous tools.

The best thing is in the past few years I've seen more improvements in tape measures than I've seen in the previous thirty-five years combined! It's hard to believe you could improve a tape measure, but believe me a few companies have really done an amazing job.

First, let's discuss the common markings on a tape measure. Most tape measures I use in carpentry and building have black lines at a 90-degree angle to the edge of the tape measure in between each of the inch markings.

These lines are different lengths to help you differentiate between them and to help you understand what they mean. Look closely at the tape at the bottom. See the markings to the left of the 6-inch mark? Those are 32nds of an inch!

The longest of these black lines indicates the halfway point between each inch. It's the half-inch mark. So if you want to cut a board 3 and ½ inches wide, you'd make a crisp pencil mark on the board at the longest line in between the 3 and 4-inch markings on the tape measure.

Watch this video made around the year 2004, that's still relevant today! My voice has changed!!!

The next longest lines on the edge are the quarter-inch markings. Since the half-inch mark is longer than these, it overlaps one of these three markings in between each of the primary inch marks.

If you start at the 1-inch mark and count the quarter-inch markings, including the half-inch mark, you'll discover you get to four when you finally get to the 2-inch mark. Thus, these marking divide 1 inch of length into four equal parts, each one-quarter inch long. 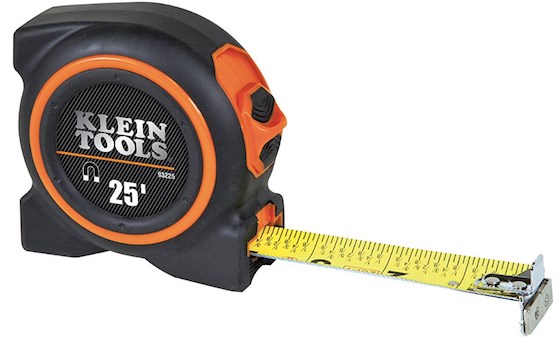 This is the great tape measure I have that has the fractions marked on it if you need help. It's VERY EASY on the eyes. CLICK THE IMAGE NOW TO ORDER ONE.

The same is true for the next two smaller markings on the tape measure. The next smaller line below the quarter-inch mark is for one-eighth, and the shortest line represents the one-sixteenth-inch mark.

I realize this may be confusing, but fractions are the standard we use here in the USA. To make this easy for you, some tape measures along one side of the tape measure have the actual measurement called out by each line. I have a tape measure If you can't remember fractions, some tapes call them out for you.

Point Of No Return

Some tape measures have markings that divide each inch into 32nds of an inch. You'll discover the markings are so fine and close together that it's tough to determine where you are. Most tapes that have this only do it for the first few inches on the tool.

This is a common framing spacing for wall studs, floor joists and common roof rafters. If you decide to space framing at 24-inch centers, the red marks will be at every other foot marking on the tape measure.

Many people wonder about the mystical small black diamond markings or black triangles found at 19 and 3/8 intervals on the tape measure. These are handy markings if you want to achieve equal spacing for five framing members per every 8 feet.

This is done so you get an accurate measurement when you're trying to determine the exact measurement in between two fixed objects.

When you get the measurement pushing the tape hard in between the objects and then take the tape and pull it across the board, the movement of the hook will produce the correct measurement. If the hook doesn't move, you'll discover your cut piece will always be too short.

The top tips for tape measures are simple. Keep them clean and free of debris. When retracting a tape measure slow it down so the hook doesn't come to an abrupt stop.

Check the hook end of the tape measure before working to ensure it's at a 90-degree angle to the actual metal tape. If you drop the tape and the hook gets bent, you'll discover you'll be getting inaccurate cuts if someone else is giving you measurements!

What happens if the hook isn't kept clean? Well, errors happen! Read about my issue in the opens in a new windowAugust 9, 2009 Newsletter! Oops!

The above is an affiliate link. I get a tiny commission if you purchase this item from Amazon.