This is but one treated lumber deck post on the same deck that is rotting. Can you imagine the safety issues this poses? Copyright 2017 Tim Carter

DEAR TIM: In just a few weeks, a builder will show up to completely rebuild my deck. The house is only twenty years old and the treated lumber used to build it is rotting away.

The centers of the deck railing posts are crumbling. I thought treated lumber was supposed to last forever. What is the problem?

I religiously applied sealer to the wood thinking that would help, but alas it was just cosmetic. Can you trust treated lumber? Is it possible my deck could have collapsed? Cathy B., Cincinnati, OH

DEAR CATHY: Your dilemma reminds me of past email exchanges I’ve had with builders and companies that swear treated lumber foundations are so much better than poured concrete.

Wonders Of The World = Stone

The go on and on about how the wood is so much more energy efficient. My reply to all these is that the great Wonders of the World are all built with rock and then I go on to mention that it’s possible things can go wrong in the treatment process that cause the wood to rot prematurely.

It didn’t work and it took about eight years to discover the preservative formulation was defective. The dream house I built had these windows with the defective clear wood preservative. Fortunately I was able to negotiate a very fair settlement. The bottom line is that wood rots and many things can go wrong in the treatment process causing premature failure.

I’ll finish with another personal story. About twenty-five years ago, I used treated lumber approved for burial to construct a play set for my kids. The chemical treatment guarantee mentioned that it was formulated to resist termites and other wood-destroying insects.

After about ten years, my kids no longer used the play set and I needed a place for an outdoor Queen Anne Victorian garden shed. When I pulled the 4x4 posts out of the ground, one third of the wood was gone and the termites were feasting away. 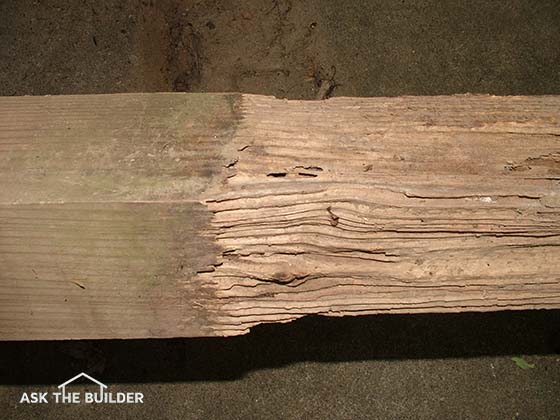 Lookie, lookie, Can you see the extensive termite damage on the right side of the post? Imagine my reaction when I pulled this post out of the ground. ©2017 Tim Carter

I could see the little white insects gorging themselves on the wood.

I’m telling you these stories to make a point. Treated lumber is a good product, but you need to realize there’s an element of risk when using it. As with a chain, treated lumber is only as rot proof as its weakest link. Here’s just a partial list of things that can go wrong in the treatment process:

The actual chemicals used in the process could be defective or the wrong concentration is made at the chemical factory. A lab technician doing quality control can make a mistake. If the chemicals are diluted at some point in the process, a human error could cause the solution to be too weak.

If the process involves pressure to drive the chemicals into the wood, the pressure gauge on the vessel could be defective. If the pressure treatment is to last for a specific amount of time, it’s possible the wood is removed too early from the treatment chamber. I could go on and on with other scenarios.

Deck Collapse Due To Rot

There’s no doubt that treated lumber rotting can lead to structural defects that cause decks to collapse. Sometimes these stories make it to the news, but my guess is you’d have to dig deep into insurance industry records to see the extent of treated lumber structural collapse incidents that are the result of rotting wood.

I’m currently rebuilding a large deck on my own home that’s made from treated lumber. Fortunately I’ve not encountered any severe rot in the treated lumber, although I have come across three minor areas where the wood has been compromised. What’s more, I just added a new treated lumber deck to my existing one, so I continue to use the product.

There are quite a few videos out there capturing the moments decks collapse. There are many reasons why the decks fail, but just know you're at risk if you've not inspected the deck before you get on it. These collapses were covered in the opens in a new windowJune 20, 2017 AsktheBuilder Newsletter.

I have faith in the product and have taken steps using modern new products to minimize water infiltration into both the new deck and the existing treated lumber. You can purchase new tape that is applied to the top of deck floor joists.

I prefer the tape that comes with the butyl adhesive rather than asphalt-based adhesive. This tape helps to keep the treated lumber dry where the decking lays on top of the joists.

You can also install special membrane systems over the entire deck structure before you install the decking. Not only does this system stop all water from touching the treated lumber joists and beams, but it also creates a dry living space under the deck in the event your deck is high enough to walk and sit under.

The Trex Transcend decking is being installed. Just as I say in the video, the Trex RainEscape sits BELOW the decking. Snow and ice don't collect on it, they sit on top of the decking. Photo credit: Tim Carter

I’m just finishing up now installing this membrane system on my large existing deck. The treated lumber will never get wet again and this deck should last for a very long time.

I think the only danger at this point is collapse from extreme snow load. But knowing this is a possibility, I added lots of special timber screws to help make the deck stronger.

You can also help prevent water from entering the end grain of deck posts and support columns. The open end of timber facing the sky invites water to penetrate deeply into the wood. Install decorative post caps that create a small roof over the tops of exposed deck railing posts. Use the special deck joist tape to cover the vertical exposed tops of any deck posts before you rest a beam on top of them. Here's but one type of deck post cap. There are MANY styles, some with solar-powered lights in them for decorative night lighting. CLICK THE PHOTO NOW TO HAVE ANY OF THESE DELIVERED TO YOUR HOME NEXT WEEK.

Finally, do periodic inspections of any treated lumber using an ice pick. Poke beams and columns to ensure they’re not getting soft.

opens in a new windowClick here to read other problems with  treated lumber when placed under a steel I-beam.