How to Build a Deck

DEAR TIM: I need to know how to build a deck. What are the most important steps to take?

I live in an area where it snows, and a neighbor told me I have to worry about the frost line. What is that?

As you can tell, I am a rookie and need lots of direction. I am determined to do this job, and just need to be pointed in the right direction. Mary Jo G., Vancouver, WA

DEAR MARY JO: Holy Moly! There is so much to know about how to build a deck, I don't know where to begin. One thing is for sure, I can only scratch the surface in the limited space I have.

Perhaps the most important things to consider are: zoning and deck structure. If you drop the ball in these areas, I feel you will have a disaster on your hands. Finally, do not underestimate the amount of physical labor this project will consume. The framing materials used for decks can be very heavy and cumbersome. If the deck surface is over four feet in the air, then an extra degree of difficulty is added to the job.

Many homes are built in areas that have zoning laws. Since most decks are attached to homes, zoning laws can dramatically affect the overall size and shape of the deck. An interesting loophole might exist in some zoning codes if you design the deck so it does not attach to the house. Be sure to read the code carefully, and ask if you have more or less latitude if the deck is a free-standing structure that is only one inch from your back door.

The building codes that are in force in many parts of the nation look very closely at outdoor decks. Each year decks collapse and injure or kill people. In fact, a serious deck collapse happened in my own city years ago, while a large group of people were having a party to view a fireworks display. The building codes require decks to support loads much greater than standard floors inside residential homes. This deck was built by a novice with a little coaching from a pro. The homeowner planned it well as the deck is large enough for two separate seating areas. PHOTO CREDIT: Tim Carter

One thing that causes me great concern is the amount of bad advice I see on other websites. For example, one website says to lag bolt a ledger board to the side of the house. This is exactly why the deck collapsed in my town during the fireworks display! Lag bolts do not have the holding power of through bolts. Lag bolts can pull out of the structure and/or have reduced holding power if they are overtightened.

The deck building codes are stringent because code officials know that large parties with many people are common on decks. Furthermore, the group of people might start dancing which can create a motion that can cause decks to sway. For these reasons and others, you must ensure your deck is designed to code-minimum standards. Diagonal bracing applied to the underside of the floor joists helps minimize sway, as do braces and special metal framing connectors that can be used where deck beams attach to deck support posts. If you are in doubt about any of this, hire a registered architect or structural engineer to provide you with a detailed framing plan. 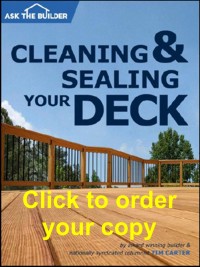 The frost line is a distinct depth in your local soil to which frost can be expected to penetrate during the coldest part of any given year. This line is generated from years of historical data, and it can vary widely depending upon weather conditions. For example, the frost depth in my city is 30 inches below the top of the surface. But in the recent decade, there have been winters when the frost maybe penetrated only three inches into the soil. But I remember the horrible years of the late 1970's, when the frost penetrated to over six feet in certain areas of my city.

The importance of the frost line is significant. When water freezes it expands in volume about nine percent. Since most soils retain water, they freeze, expand and almost always lift upwards. Soils against exposed retaining walls also freeze and expand sideways. This expanding soil can tip over retaining walls and lift up structures. The lifting force is extremely powerful. If the lifting force is not equal and consistent at all points, then stress can build up within the deck causing it to twist. This helical motion can cause severe structural damage.

By placing the bottom of deck foundation supports below the frost level, you can rest assured the deck will not move as the ground freezes. Always be sure that vertical concrete piers or columns are dug so the bottom of the hole is wider than the top. This upside-down cone shape helps lock the foundation into the freezing soil just as a dovetail joint works in carpentry.

One of the biggest challenges rookies face in building decks is how to accurately locate any and all foundation piers. The margin for error is very small, and it is important that deck support posts are plumb.

One trick I learned years ago is to simply build just the outer frame of the deck. As it is being built, support the frame up in the air with temporary posts placed at least two to three feet away from the planned vertical support posts. Add extra temporary posts so the deck frame will not collapse as you work beneath it.

Using a level, tape measure and grade-school geometry, you can make this shape level and square. Brace this frame so it doesn't move, and then use a plumb bob to transfer the outer corners of the deck down to the ground. This fool-proof method allows you to precisely locate all foundation piers with a minimum of effort.

2 Responses to How to Build a Deck