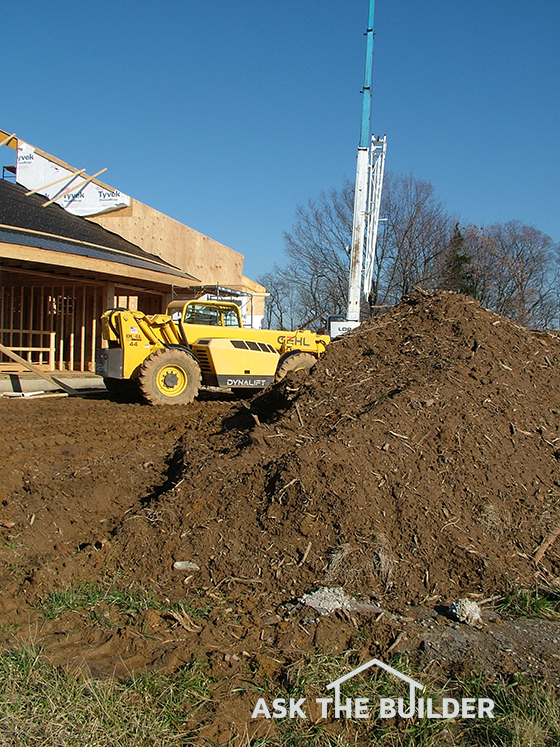 Soil Test New House | This large pile of clay soil was excavated to make room for the basement of this home. It's a strong soil and can easily support the weight of the new home. You need to check the soil even if building an A-Frame house. ©2021 Tim Carter

DEAR TIM: My husband and I are building a new home and were told by a friend that our soil testing certificate must have an official stamp. I don't see a stamp on the faxed copy I have.

Is this important? How concerned should we be about the soil under our foundation?

I see buildings near my new home that have been around for nearly 100 years and they are still standing. Should I be worried about the quality of the soil on my building lot? Shelley B., Lawton, OK

DEAR SHELLEY: The original soil testing certificate may have a faint or embossed seal that might not have been seen by the sending fax machine and/or your fax machine may not have been able to reproduce the image.

The safest thing to do is to talk with your local building inspector and see if the faxed copy is sufficient for his inspection. If it is not, then ask him what he needs to see before your builder proceeds to do any construction on the building site.

How Many Houses are Built on Soil vs Rock?

The vast majority of homes built in the USA are built on soil, not on bedrock. Soil is a mixture of small, decayed bedrock particles; organic material such as decaying plants, wood and animals; air; and often water.

Soils vary in type, composition, and strength. The differences can be significant. Some soils are very strong and can support significant weight, while other soils are weak and compress under light loads.

The old buildings that are structurally sound that you see near your new home undoubtedly have foundations that rest on high-quality soil or the weight of the structure has been transferred deeper into the ground where good soil or rock can be found.

Can You Build on Poor Soil?

Structural and geotechnical engineers have countless solutions for erecting buildings on low-quality soil. Wide steel-reinforced concrete footings can be used as well as any number of different steel, wood and concrete vertical piers.

Piers are vertical columns that transfer the weight of a building deep down into firm soils or make direct contact with bedrock. The bottom of the building foundation rests on the top of these vertical piers much like a tabletop is supported by the table legs.

How Much Does a House Weigh?

You should be very concerned about the soil quality of your building lot. What you see on the surface is not indicative of what might be 10 or even 20 feet below the surface. Soil that feels firm under your feet may not be very strong.

Realize that houses weigh in the tens of tons. It's all a matter of how much weight per square inch the soil can support without moving down.

Some soils are very prone to landslides. Cincinnati, Ohio has two bedrock formations, as well as some glacial clay deposits, that cause millions of dollars of damage each year.

The Kope and Lower Fairview rock formations contain a high amount of shale rock that decomposes into a weak soil. This happens on the hillsides in the river valleys around Cincinnati and Northern Kentucky. Can Blended Soils Be Bad?

Land developers might place a weaker soil on top a strong soil or vice versa. These same developers can also radically change the shape of the land with giant earth-moving equipment. Soil from high spots on a piece of land is cut away and transported to low spots.

This kind of land transformation is acceptable if it is done correctly. But sometimes developers or contractors take shortcuts.

Is Fill In Valleys?

For example, a friend of mine discovered his house was built on top of an old, deep ravine. His lot was level because 25 feet of fill dirt had been installed in the old valley.

But the contractor who installed the dirt buried trees and other vegetation in the ravine before the dirt was installed. Five years after the house was built, large cracks developed as the soil under the house began to sink as the buried vegetation decomposed.

Do Old Maps Have Clues?

You can help identify potential problems such as these by getting copies of older topographic maps from local government agencies, local colleges that have engineering or geology departments or the United States Geological Survey.

Using these older maps, you can see if a new land development has topography matching the old maps. You may quickly discover several lots are built on top of a preexisting creek or stream.

The local government may have copies of the developer's grading plan that show you which areas were cut and which were filled.

Where Can I Get Soil Surveys?

Many local governments also have copies of soil surveys. These extremely detailed studies show the different soil types and soil characteristics for a given county.

I currently live in Belknap County in New Hampshire. CLICK or TAP HERE to see my soil map.

Many of these soil surveys tell you which soils are strong and well-drained and which ones are weak and not well suited for building sites. It is always a good idea to study a soil map or survey before you buy a particular piece of ground.

What are Expansive Clay Soils?

Some soils that are strong have other problems that can wreak havoc on new homes. Certain clay soils are highly expansive and contractive. This means they swell and shrink in response to moisture content.

The soils move so much and so dramatically that they can tear a new home or slab apart with little effort.

Structural engineers know how to build foundations to resist this movement. In addition to a reinforced foundation, it is a good idea to install an irrigation system under the foundation so water can be slowly and regularly injected into the soil during periods of dry weather.

If the soil thinks it is raining at the surface because the moisture content stays the same, the soil stays the same shape and size and does not stress the foundation of the home.