Are you a new subscriber?

Welcome! See that link just to the right, this one? CLICK IT.

Each week that's a secret link to a past column that may make your wildest dreams come true.

What a summer it's been so far. I'm in a state of shock that it's already the middle of August. Labor Day is just around the corner. Me wearing my magic bow tie and Conductor's hat.
Believe me when I say the tie and hat have powerful magic. Most women boarding the train want a photo of me kissing them on the cheek.
Yes, it's a real bow tie I tied.

I've been working on the train for three days a week this season. It's been loads of fun. This is a dream once-in-a-lifetime part-time job. It's my second season.

Two days, I'm the train conductor. The other day each week, I'm a fireman.

On our train, a fireman is the ground man doing all the switching of cars. I love doing this and we do it six times each day. It's thrilling to be next to the throbbing locomotive as I bring it in for a hitch.

But the real excitement happens when I jump down in between the car and the locomotive to lace up the air lines.

Yes, don't worry all you engineers out there, I've got three-step protection when I go in between to lace them up.

When we travel north on our tracks, the fireman becomes an extra set of eyes on the left side of the train for the engineer.

The long snout of the locomotive blocks the engineer's vision on one side of the train, so I'm watching for people on the tracks and vehicles at crossings.

Just last week, we almost plowed into a pickup truck. The driver slammed on his brakes at the last moment.

I was just about to reach behind me for the dump air valve to put the train into an emergency stop, but the truck driver decided he'd screech to a halt just three feet from the passing locomotive.

I'm sharing this story for a reason.

You will ALWAYS LOSE.

Our tiny train of just a switching locomotive and five cars weighs in at about 400 tons.

Even though we're only traveling at 12 mph on average, 400 tons against the 2-3 tons of your car is no match.

Please, please, please always STOP, LOOK and LISTEN at railroad crossings. The listen part is for the 19-B required horn blast trains must do at public roads.

It's the Morse code letter Q. Two long blasts, a short blast then a long blast.

I'll finish with this. This past Wednesday, I had to deliver a can of gasoline to our track crew on a nearby side street.

A young couple who were renting a nearby house for a week was out for a walk, saw my uniform and said, "Do trains really come on this track?"

I went on to tell them that at any time day or night a train or locomotive could be on this placid train line along the gorgeous Lake Waukewan.

Speaking of which, here's a photo I snapped last weekend of a sunset near the railroad tracks looking across Lake Waukewan.

How lucky I was to witness this magnificent gift. 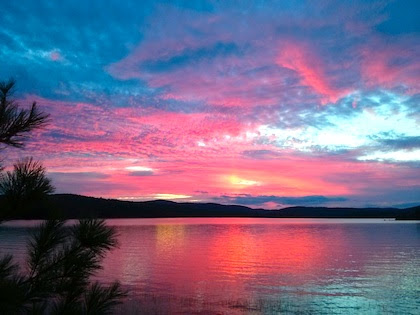 A new house is being built at the end of my road.

The rough carpenters finished framing the roof this past week and the two-car garage faces the street.

As Kathy and I went to church today I mumbled to her, "I wonder if those homeowners realize they'll not be able to open up their car doors inside the garage."

When I saw the foundation for the garage being poured two weeks ago I spotted the common problem.

The distance from the outside corner of the foundation to where the garage door opening started was only 2 feet.

The catatonic builder and architect who drew the plans for the house I live in made the same mistake. I see it happen 99 percent of the time in garages all across the land.

Why does this mistake keep happening? It's insane.

I wrote a column years ago about the Dream Garage.

CLICK HERE to read what your garage should be like when you go to build again or perhaps build a detached garage.

I've got a wand-type gas detector that I need to test, but the roof job is putting everything like that in the back seat.

However, this is important enough that you need to know about this NOW. 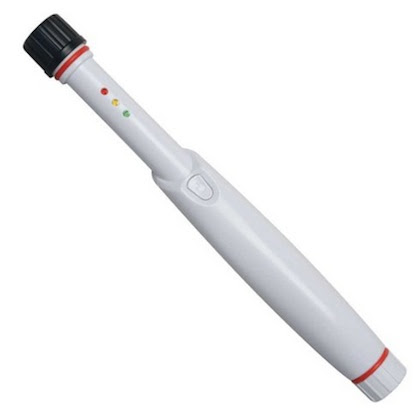 This detector works on all sorts of gases, not just natural gas. CLICK HERE to read about what it can do.

I read the reviews about it at Amazon.com. Some are good and some are bad.

That's pretty normal as I know it's impossible to satisfy everyone.

But here's what you need to know about gases and some of the reviews.

Some gases are HEAVIER than the air we breathe.

Propane happens to be one.

If you're trying to detect a propane leak, holding the wand ABOVE the pipe or fitting may not produce a hit!

Realize when you're using a gas wand detector like this go above, under and along the sides of joints as you test them.

It's possible the bad reviews were a result of operator error and not the fault of the tool.

I've been busy..... I had a few hot days and it was just impossible to get up on my roof.

Barb and Grouting her Sunroom Floor - Too Much?

Putting a Deck on a Patio in Plantation - Not So Fast James!!!

Rouge Grout on Cabinets - How to Remove SECRET!

That's enough for this hot and HUMID day here in NH!