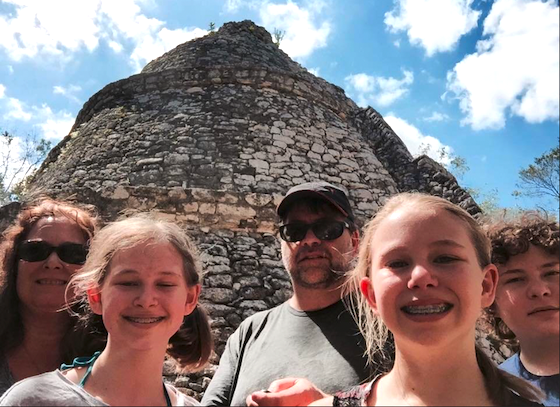 This is Brian Short with his family.

Author's Note: Be sure to look at a screenshot of a news story from June 8, 2022 that's at the end of this article. The night before a young man was arrested outside of Supreme Court Justice Kavanaugh's home. The last line says it all.

Brian Short was a smart and successful man. He was calm, had an amazing sense of humor, and never was cross. He was a loving husband and father.

Brian was a member of a very secret group of successful Internet entrepreneurs I helped found in 1999. Each of us had a website in a particular niche. His was AllNurses.com. It was the go-to place for nurses from all around the USA and world.

On or about September 7, 2015, Brian used a brand-new Remington 12-gauge shotgun to murder his three teenaged children and his wife. Brian then went to the garage, sat in a chair, and proceeded to blow off his own head.

Are you asking yourself, "What does it take to put the barrel of a shotgun at the head of your child while she/he is gently sleeping and PULL THE TRIGGER?"

Not once, not twice, but three times, then do the same with your frantic wife.

What would cause that sort of abnormal behavior in a person who had no past history of abuse or violence?

The Secret Inside Scoop

Brian shared his success within the secret group. We all did. But we also shared when headwinds or hurricanes hit.

Google aimed a firehose of money at Brian and several others in the group between 2004 and 2015. I was one of them.

But the winds of fortune can be fickle. The first to fall was a very good friend of mine who made significant money from affiliate revenue. Google sent all sorts of people to his website. Then one night, the traffic disappeared just like you'd turn off a water faucet.

The same thing happened to me on a dark and cold February night in 2011. I woke up to discover 95% of my traffic - and ad revenue - had disappeared like a puff of smoke in a windstorm.

Then it happened to Brian. The traffic to his AllNurses.com website vaporized a few years after mine. That traffic was responsible for creating the vast sums of money that flowed into his accounts each day.

All of a sudden he was making peanuts each day. Not nearly enough to get by.

This loss of income caused Brian, a smart upbeat registered nurse, to experience severe depression. He was in his mid-40s. How was he going to continue funding his lifestyle?

Would he have to go back to working on a hospital floor making 2% of what he had been making each day? How could he explain to his kids that he was now what he thought to be a failure?

He went to a doctor that prescribed a cocktail of psychotropic drugs to help him cope with his depression.

Do you know the side effects of psychotropic drugs? You can go read about all the soft and fuzzy ones online but dig deep enough and you quickly discover these evil drugs cause a person to become uncoupled from reality. They also cause hallucinations and delusional behavior.

Do you think you get the whole truth from news reporters? You know a half-truth is a whole lie, right?

Sometimes it's not possible for a reporter to have access to the whole truth. Current HIPAA laws in the USA create this roadblock in cases like Brian's and that of every other mass shooter you read about or see on TV.

That said, how many times have you seen or heard a simple brief mention in a mass-shooter news story, "...the shooter was being treated for depression."

Then abruptly the reporter or writer moves on.

You don't hear the reporter/writer speculate on what the  treatment might have been. Was the shooter on psychotropic drugs like Brian?

But now you know what might have been the ROOT CAUSE of the shooter's behavior.

Do you have a piece of graph paper? Do a small bit of research and chart the timeline of the introduction of the many varieties of psychotropic drugs and their use on the masses. Then chart when mass shootings started to happen.

I think you already know what you're going to discover, especially if you've had 60+ trips around the sun.  If you're as old as I am, you know growing up you NEVER heard of mass shootings like we've experienced in the past 20 years or so.

Then ask yourself as you reach for the box of heavy-duty aluminum foil from your pantry, "Why in the HELL don't we hear about this on TV and in news stories?

Why wouldn't TV anchors they tell us the TRUTH about what probably is causing the mass shootings?"

STOP BEING LED BY THE NOSE BY YOUR NEWS SOURCES!!!!! 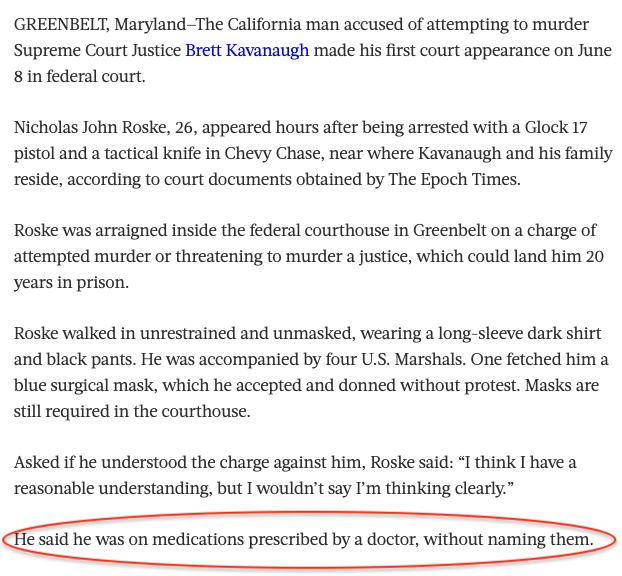