This switch looks somewhat normal, except for the soot around the edges. Too much electricity flowed through it, the switch MELTED and started to burn. CLICK THE PHOTO to read the story of what happened and HOW TO PREVENT IT. Wait until you see the back of the switch! (C) Copyright 2016 Tim Carter via anonymous friend contribution

DEAR TIM: I'm getting ready to add some electrical wiring in my house. I know that I need to install some extra circuit breakers. What are the different types of circuit breakers?

DEAR K.D.: If you haven't worked with household electric that got 240 volts of power before, I want you to be careful.

It Will Bite You - Can Be Deadly

Standard residential electricity (120/240 volt) is dangerous. You must treat it with the utmost respect. People are killed on a daily basis by electrocution and fires which result from improperly installed wiring and electrical devices.

Also, as you progress with your work, be sure it is inspected by your local inspection authority.

The huge house fire in this video could have been prevented with a simple special circuit breaker. Don't let your house BURN!

What Are Circuit Breakers?

The conventional circuit breakers you're getting ready to install are wonderful devices. They're basically automatic switches that disrupt the flow of electrical current in the event of an overload.

The sole function of basic circuit breakers, believe it or not, is to protect the wiring that runs from the circuit breaker panel to the various switches, outlets and fixtures. Conventional circuit breakers will not protect you from electrocution, nor will they protect equipment from voltage surges.

The electrical wiring in your house can be easily damaged by having too much electricity flow through it too fast. As electricity flows through a wire it generates friction.

This friction, in turn, generates heat. It's possible to generate enough heat to melt the insulation on the wires.

Virtually all residential circuit breakers have two independent methods which allow them to automatically switch off or trip. The heat, we just spoke of before, can trip a breaker.

When too much heat is generated, a small piece of bimetal inside the breaker begins to bend. This bending force causes the breaker to switch off.

This property works well to protect the wiring when electrical demand slowly builds.

Short circuits like this allow massive amounts of electricity to flow through wiring very quickly.

Small electromagnets within the breakers sense this flow and instantaneously switch the breaker off before the insulation covering the wires begins to melt.

Here are samples and photos of the types of circuit breakers you'd find in a typical residential home like yours: This is a standard single pole circuit breaker. It's 15 amps and they come in various amperage ratings. It's for a single 120-volt circuit in your home like controlling some wall outlets and maybe a few ceiling lights or a bath fan. CLICK THE PHOTO NOW TO SEE MORE BREAKERS AND TO HAVE THEM DELIVERED TO YOUR HOME NEXT WEEK. This is a double pole 30-amp breaker. Note it's double the width of the single pole breaker. It takes up two spaces in the electric panel. It's for a 240-volt circuit in your home. You'd find a breaker like this controlling the power to your electric clothes dryer. CLICK THE PHOTO NOW TO SEE MORE DOUBLE POLE BREAKERS AND TO HAVE THEM DELIVERED TO YOUR HOME. This is an unusual breaker. It's a tandem breaker that controls two different circuits but only takes up the space of a normal single breaker. You can use this breaker if you start to run out of space in your panel. CLICK THE PHOTO NOW TO SEE MORE TANDEM BREAKERS AND TO HAVE THEM DELIVERED TO YOUR HOUSE FASTER THAN YOU CAN SAY "SPARKS! RUN AWAY!" This is perhaps the MOST IMPORTANT circuit breaker you could have in your home. It's a combination GFCI and a CAFCI breaker. This is the type that CAN SAVE your life and PREVENT FIRES!! CLICK THE PHOTO NOW TO ORDER THESE LIFE-SAVING BREAKERS SO YOU DON'T BECOME A STATISTIC.

Electrical wiring, extension cords, and breakers are manufactured to withstand certain amounts of electrical current without damage. The standard by which they are measured is amperes or amps.

You probably have a few dangerous extension cords in your home that are made with 16-gauge wire. These can handle just 10 amps. Electrical currents passing through this wire in excess of 10 amps can cause catastrophic failure to the wire.

IMPORTANT TIP: What happens if you have this cord plugged into a 15-amp circuit?

If you are powering something that's calling for MORE THAN 10 amps, the cord insulation can MELT and catch FIRE. You need to use extension cords that have their own built-in breakers! 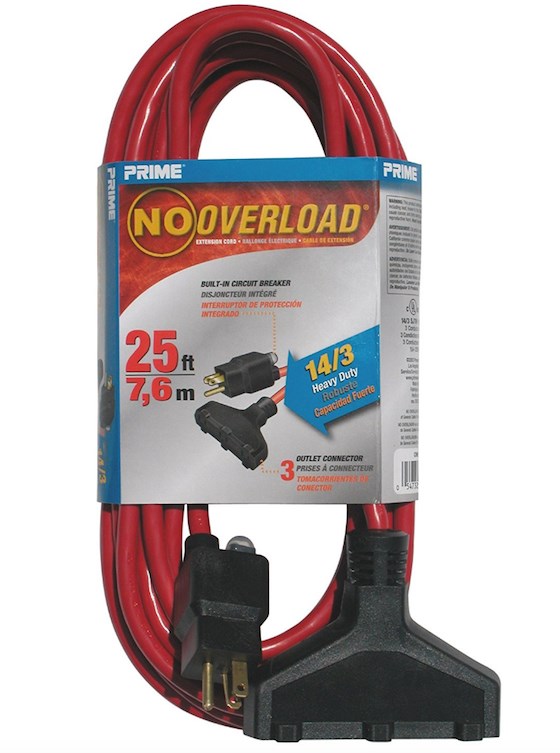 Here's an extension cord that's got a built-in breaker. If you try to overload it so it would OVERHEAT and catch on FIRE, the built-in breaker SAVES you. CLICK THE PHOTO NOW TO HAVE THIS SAFE CORD DELIVERED TO YOUR HOME.