Here's a crown molding gap at the ceiling. The red arrows point to the ugly gaps. See below how to avoid and fix them. Copyright 2018 Tim Carter

"Crown molding ceiling gap happens because the rough lumber behind the drywall shrinks. It can be prevented by nailing the ceiling molding to the ceiling allowing it to float up and down on the wall."

Why is There a Crown Molding Gap at Ceiling?

Ceiling molding, or crown molding, can pull away from the ceiling because the humidity inside a home is less in the winter months.

Charlie from Easley, SC has a crown molding gap where it meets the ceiling. I have the same issue at my own home.

It's important to realize he’s got ceiling crown molding in at least one room of his home and in the winter months a gap appears between the top of the crown molding and the ceiling.

He felt it was a temperature-change issue, and in some ways he’s correct. However, it’s important to realize the temperature in his home is very likely fairly consistent month to month. Perhaps it varies by eight to ten degrees.

opens in a new windowLumber Shrinkage Facts and Secrets

opens in a new windowCLICK HERE to get FREE & FAST BIDS from local painters who can caulk the ceiling gap. This ceiling crown molding gap happened because the wall drops down in the winter from lumber shrinkage. Copyright 2018 Tim Carter

Yes, rough lumber shrinkage is the cause of crown molding gap.

Crown molding ceiling gap happens because the rough lumber behind the drywall shrinks. It can be prevented by nailing the ceiling molding to the ceiling allowing it to float up and down on the wall.

Another key point is the outside temperature and humidity is much different in South Carolina during the year. As the air cools down during winter months, it holds much less humidity.

The lumber in Charlie’s, and my, house dries out and shrinks. This rough-framing lumber shrinkage is the source of our joint woes.

How Can I Fix Ceiling Molding Gaps?

You can fix ceiling molding gaps temporarily in the winter by caulking the crack. Do this when the gap is the largest and use the most expensive flexible caulk you can buy. This small piece of ceiling molding is affected just like long pieces. It's easy to do it right, but hard to repair. Copyright 2018 Tim Carter

How Can Crown Molding Gap Be Prevented?

The problem could have been prevented had the carpenters that installed the crown molding attached it to the ceiling instead of the wall studs. The foot of the crown molding would then just ride up and down the wall surface as the lumber expands and contracts with the change of seasons. 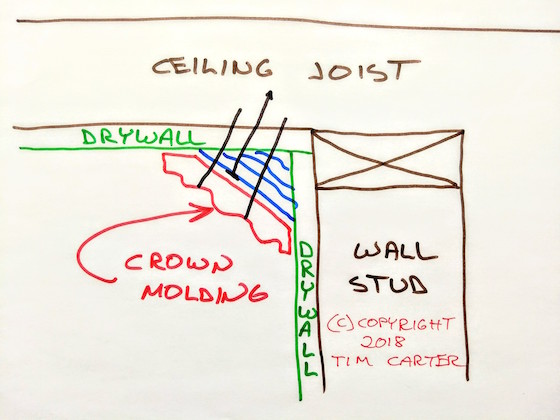 Charlie’s best chance of fixing the crack without reinstalling the crown molding, a huge pain in the keister, is to caulk the gaps in the middle of winter when the gap between the molding and the ceiling is the greatest. I’m going to fix mine by using the most expensive caulk I can locate that has the greatest amount of long-term flexibility.

Six months from now the caulk seam may squeeze out of the gap a little bit, but come next winter if the caulk performs as expected, there will be no gap.

opens in a new windowCLICK HERE to get FREE & FAST BIDS from local painters who can caulk the ceiling gap.

Article Name
Fix Crown Molding Gap at Ceiling | AsktheBuilder.com
Description
You can caulk the crown molding gap, but the better fix is to make sure it's not nailed to the wall. Nail the molding to the ceiling.
Author
Tim Carter
Publisher Name
AsktheBuilder.com
Publisher Logo