These two diagonal braces help prevent the deck from moving side to side. These were just toenailed into the horizontal beam and vertical wood post. It would have been better if they had been bolted using 6-inch-long lag bolts. © 2017 Tim Carter

DEAR TIM: I have some building projects facing me. One's a tall deck, another is framing a garden shed, and then I need to help a friend with a room addition. I'm wondering about diagonal bracing.

I don't understand it and need to know why it's important. Is there a short cut? Can you give me the executive summary so I don't have any problems on these jobs? Randy P., Kokomo, IN

DEAR RANDY: You'll be getting the executive summary all right. Books have been written about diagonal bracing. Talk to any structural engineer and I'm sure he'll tell you that entire college courses are offered on the topic.

Diagonal bracing is a very complex topic, but I'll do my best to give you the basics so you don't have a failure on any of your projects.

Diagonal bracing is a structural component of just about any building. It provides lateral stability preventing collapse of a wall, deck, roof, etc.

Let's talk about what happens when you don't have diagonal bracing in place so you get a better understanding. Imagine if you were to build a wall using 2x4s 16-inches-on-center and you make it 8-feet-tall.

If you stand the wall up and nail the bottom plate to the floor to hold just that in place, the wall might seem strong if you put weight on the top. The wall can support weight pushing straight down very well if the wall is stabilized.

Don't you stand on the wall to test this. It will collapse.

But here's the scary test. Get on a stepladder at one end of the wall. Push on the end of the top plate as if you're trying to move the 2x4 plate forward, not side to side so as to make the wall tip over.

You'll quickly discover you can collapse the wall down onto itself with little effort like you'd close an accordion door. In seconds you can have the 8-foot tall wall folded up on itself and only inches high on the floor.

The bottom of the walls, or house, would stay attached to the foundation, but the top would go towards the direction the wind was blowing until it collapsed.

Or imagine the violent side-to-side shaking that happens when the shear waves of an earthquake hit a house.

Earthquakes create two waves that are 90 degrees to one another. The first wave to hit is called the primary, or P, wave. It makes the ground go up and down much like you see waves ripple on a pond when you toss in a stone.

But the shear, or S, waves that come a few seconds later travel sideways through the ground. They look like a snake that's moving at high speed going across the soil. The s waves are the destructive waves that cause buildings to collapse as they shake the structures sideways back and forth like a rag doll in a dog's mouth.

Can you see how the house could easily collapse? When pro carpenters build a house, they install different types of bracing. One might be a metal diagonal bracing from the lower corner of a wall up to the top plate.

Plywood or oriented strand board (OSB) properly nailed will also provide excellent diagonal bracing. You typically only have to put one full sheet of plywood at each corner of a wall to provide the needed stability.

Old carpenters sometimes put in let-in bracing where they mortise in a 1x4 into the wall studs. This brace travel diagonally across the wall studs from the top to the bottom plate. It's time consuming to install.

Diagonal blocking can also be installed in between wall studs. These blocks start at the bottom plate and march up the wall in a straight line until they reach the underside of the top plate. The pieces of wood do double duty acting as fire blocking within a wall.

The plywood or OSB transfers its rigidity to the wall.

See that angled board nailed to the vertical wall studs? It extends from the top right corner of the wall to the lower left corner bottom plate. It’s a temporary diagonal wall brace used to stabilize the framing while the house is built. © 2017 Tim Carter Builder

If a group of people up on the deck start dancing and a harmonic motion builds up, the entire deck can collapse as the deck starts to shift sideways. Diagonal bracing prevents this side-to-side movement.

You can get great diagonal bracing for a deck by screwing a 2x6 to the underside of the floor joists. Use opens in a new window4-inch long Simpson Strong-Tie timber screws rated for outdoor exposure.

This is a Simpson Strong-Tie Timber screw. I've used them on my own home. CLICK THE IMAGE NOW TO ORDER THEM.

There are any number of ways to install diagonal bracing for a deck. One way is to put diagonal braces that connect the deck beams to the vertical posts. These braces are typically cut at a 45-degree angle. It's really important to bolt these instead of relying on nails.

You can also install a flat 2x6 or 2x8 on the underside of the floor joists to give the decking great diagonal support. Drive no less than two 16d galvanized nails through the brace at each floor joist. Be sure the nails have the proper coating to match the treated lumber you're using to prevent corrosion. 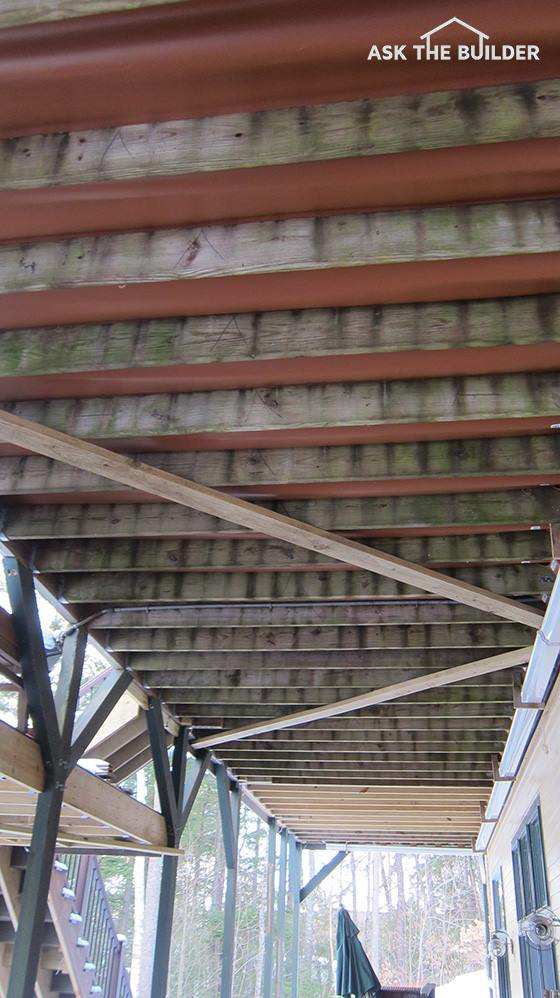 You can see the two diagonal braces on the underside of the deck floor joists. Both extend to the outer beam on the left and the ledger board hidden by the white rain gutter. The brownish-orange troughs are Trex Rain-Escape keeping the lower deck dry when it rains.© 2017 Tim Carter

Diagonal bracing is really important if you're working with roof trusses on that upcoming room addition. Many a carpenter has been killed or seriously injured when roof trusses suddenly collapse as they're erected. Wind can easily push them over without bracing.

Large truss roofs often come with detailed drawings that show bracing that needs to be installed in the webs of the trusses. Always be sure to reference any drawings or talk with the engineer at the truss company if you have any questions.

Be aware there are very strict building code guidelines with respect to diagonal bracing. The code almost always dictates the type of nail, length, shape of the head, special coatings, etc. The reason is simple: Diagonal bracing is mission critical to the structural stability of a building.

I've always found it best to install diagonal bracing for walls while the wall is built flat on a floor surface. With the wall down on the ground, it's easy to square it up.

With the wall square on the ground, you can temporarily toenail the bottom and top plate so the wall doesn't move while you nail on the plywood or OSB at the corners.

You can also nail on the rest of the wall sheathing if you like. When you tilt up the wall, it's already square and you can move on to the next wall.