This is a traditional duplex wall outlet without the cover plate. Copyright 2017 Tim Carter

DEAR TIM: I have a standard duplex electrical wall outlet where the top outlet is controlled by a wall switch. The bottom outlet is always powered as is any standard wall outlet.

I decided to change the color of the outlets and wall switches in my house. Ever since I replaced them, the outlet operated by the switch does not work.

What I mean is this outlet is always powered. Then yesterday neither of the outlets worked. What did I do wrong? Harvey S., Charlevoix, MI

DEAR HARVEY: I can think of several things that might have gone wrong.

Every time I get a question such as yours I cringe. The question often telegraphs to me that the person who attempted the repair possibly lacks the necessary training to safely and successfully complete the job.

You can get away with this with certain things such as plumbing and roofing tasks. Make a mistake and dripping water tells you to start over. But electrical repairs are different.

Electricity must be treated with the utmost respect. It can be a silent killer, one that waits for days, weeks, months and even years to claim a victim or two.

Untrained people who tamper with electrical repairs can make unsafe connections, crimp wires, create nicks in insulation, etc. All of these things can lead to hazards that can start fires.

The first thing you should do is turn off the power to the circuit in question.

I suggest we start with the obvious. The duplex wall outlet (a wall outlet that accepts two separate plugs) in question is often called a split outlet.

As you described one of the two receptacles in the outlet has continuous power as do most outlets. But the other receptacle is controlled by a wall switch.

This arrangement is a very convenient way to illuminate a room that does not have an overhead light. A table or floor lamp is typically plugged into the receptacle controlled by the switch.

At my own home, I have several split outlets strategically placed both indoors and outdoors. They come in very handy each Christmas. I never have to go outdoors nor do I have to bend over to plug in or unplug holiday lights.

Many people don't think twice about how a standard duplex outlet is wired. If you inspect one, you'll see that it has five screws: two brass, two silver and one green.

I've rotated the outlet to the right. You can see the two silver screws, they're a little tarnished, and the green grounding screw. Copyright 2017 Tim Carter

Look inside the electrical box and you often see two different cables that connect to all of these screws. In a typical installation, one cable feeds power to the outlet and the other cable goes on to another switch or outlet location delivering power to that device.

The brass screws are the ones you pay close attention too. These are where you attach the BLACK, or hot, wires. The white wires are attached to the silver screws. There are two very important and very small pieces of metal on each receptacle located between the brass and silver screws. These tabs allow you to have power in both of the outlets if it's the last outlet in a circuit. In this case only one cable enters the electric box.

Remove these small tabs of metal and the electricity does not transfer from one screw to the other. 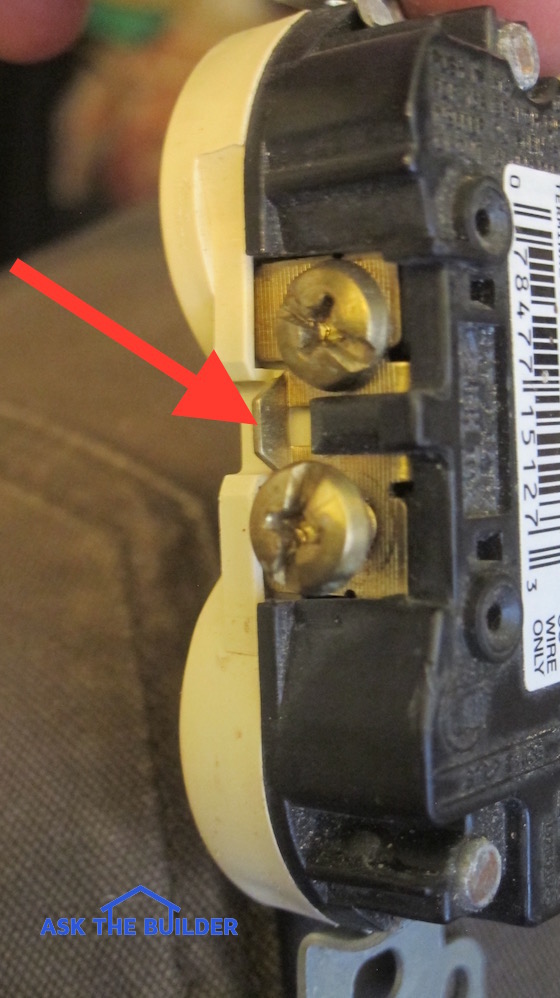 The red arrow points to the metal tab that needs to be bent back and forth until it breaks off. Do this and each of the outlets will require a SEPARATE hot wire to produce power. You connect the one black wire from the wall switch to one of the two brass screws. Copyright 2017 Tim Carter

In the case of a split SWITCHED receptacle, you must remove the tab of metal between the two brass screws. If the tab of metal is not removed, both of the receptacles in the outlet get power even though you want one of them to be switched. I think this was your first error - you failed to remove the metal tab.

No Power Is A Problem

The total loss of power at the wall outlet is more troubling. One of the wires attached to one or more of the four screws may have broken.

As you bend wires around the screws the wires can become fatigued. Further fatigue often occurs as you push the wires back into the box as you begin to screw the outlet to the electrical box.

In addition, if the outlet is not tightly attached to the box the wires can move and flex each time you push and pull a plug into the receptacle.

You must exercise great care when pushing the wires back into an electrical box. The wires need to tuck away neatly and sharp bends in the wires are to be avoided.

The insulated wires should tuck away into the rear of the box such that they do not rest next to the screws on the sides of the outlet. If you cannot achieve results that meet these simple requirements, I strongly urge that you hire an electrical professional.

What's more, I want you to pay to have your local electrical inspector come out and insure your personal safety. It will be the smallest life insurance premium you have ever paid.