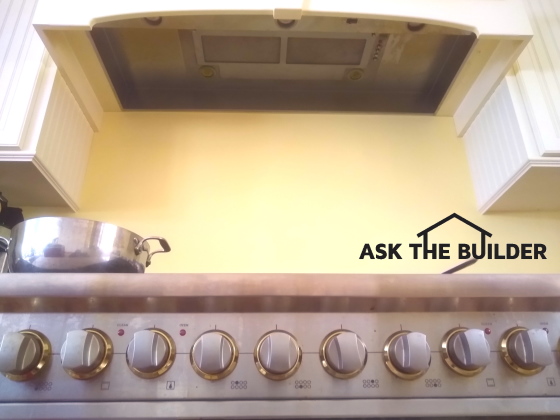 Grease Dripping From Range Hood | This is a powerful kitchen stove range hood that exhausts air outdoors. Many problems can happen if you don’t operate one correctly. The column below was so good I shared it with 31,000 subscribers in my opens in a new windowFREE December 13, 2020 newsletter. Copyright 2020 Tim Carter

"It’s important for this water vapor to be piped out of your house as rapidly as possible before it changes back to liquid water."

QUESTION: Tim, my husband and I really need your help. Our ten-year-old multi-speed kitchen exhaust fan drips greasy water back down onto the stove. Three of the highest fan speeds no longer work. The lights in the hood have also stopped working. It’s in a custom wood surround with a custom internal stainless steel frame so buying a different model will become an installation nightmare. I’m worried the fan is a lemon and don’t want a new one to fail like this one. I can tell you that years ago the highest speeds of the fan were so loud that you couldn’t hear in the kitchen, so I almost always used the lowest speed. What’s going on and how would you solve this problem? Did I inadvertently cause the problem? Monica B., Lexington, KY

Why Are Kitchen Exhaust Fans Loud?

I don’t know about you, but I’ve got a very similar kitchen stove exhaust fan like Monica’s. In fact, I had one at my last home that I thought was so powerful it would suck an infant up into the air. It sounded like a jet engine. The interesting thing is after years of use, I never had one drop of greasy water drip from my hood like Monica.

I solved Monica’s problem over the phone in less than fifteen minutes. I’ve offered this opens in a new windowone-on-one problem-solving service for years because some problems are so complex you just can’t do it with back-and-forth emails. After hanging up with Monica, I felt it was important for you to know what went wrong. I don’t want the same thing to happen to you forcing you to buy a $1,000 exhaust fan when it could have been avoided.

Should I Have Paid Attention In High School?

When you cook on a stove, your high school chemistry and physics teachers are grinning up in Heaven. Remember when you sat in class all those years ago mumbling under your breath, “How am I EVER going to use this useless information?” I have to admit, I’d sometimes say it out loud and I got to ponder the answer that afternoon sitting in detention class for 45 minutes copying my high school rule book on lined notebook paper.

The cooking process creates vast amounts of water vapor as you heat food and boil water. When you heat up or fry meat, you also melt grease and some of this also gets converted to vapor, or tiny droplets of the grease hitch a ride on some of the water vapor as it floats up from your stove.

It’s important for this water vapor to be piped out of your house as rapidly as possible before it changes back to liquid water. This is why exhaust fan manufacturers have very explicit requirements as to both the minimum diameter and maximum length of the exhaust pipe that connects your fan to the outdoors. What Fan Speed Should I Use?

You should match your kitchen exhaust fan speed to the amount of food on the stove that's cooking. More food and boiling water means higher fan speeds.

You should now understand why most of these high-quality exhaust fans have high-speed fans. The fan is trying to blast the water vapor outdoors in just a few seconds as opposed to allowing it to saunter through the exhaust pipe on its journey to the great outdoors.

The dripping greasy water problem is exacerbated by cool or cold weather. Monica absolutely can experience this in central Kentucky. I lived for fifty-five years just 90 miles north in Cincinnati, OH, and I know how bitter cold the Midwest can get in the winter months. This is why it’s a good idea to insulate both kitchen and bathroom exhaust pipes so they stay as warm as possible.

Remember in your physics class when your teacher discussed condensation? If you live in a humid climate, you undoubtedly experience this in the summer. Think about that cold can of beer or soda you take from the refrigerator and place on your patio table. It’s dry when you take it from the refrigerator but on a humid day within a minute a fog on the cold metal. Minutes later, a small puddle of water has developed at the base of the can!

Now imagine the enormous surface area of your kitchen fan’s exhaust pipe. It could be fifty or one hundred times the surface area of a single can of soda. It should start to make sense to you now why greasy water is raining down from Monica’s vent hood.

How Often Should Vent Hood Filters Be Cleaned?

Monica also asked me on the phone about how often to clean the filters in the vent hood. I asked her how often she cooks and she said every night. Fortunately, her filters are a mesh stainless steel and can be put in the dishwasher. I suggested she clean them every two weeks at a minimum.

I then discussed with Monica why there are often four speeds to kitchen exhaust fans. It’s important for you to match the fan speed to the amount of food being cooked on the stove. If you’ve got all the burners going, pots of water boiling, skillets frying, etc., you better have the fan on high speed. If you’ve got just one small pot simmering, then the low speed is usually just fine. Match the fan speed to the amount of water vapor being created.

How Long Should the Fan Run After the Stove is Off?

Monica also admitted making another mistake when I asked her how long she allows the fan to run after the burners are turned off. “Oh, I turn off the fan immediately.” That’s a mistake. Some high-quality exhaust fans come with a built-in timer that keeps the fan running for five, ten, or even fifteen minutes after you’re finished cooking.

This is done so any light condensation on the inside of the exhaust pipe can evaporate and be blown outside before it has a chance to drip back down to the kitchen. Monica’s going to get the same replacement vent hood, but this time it’s probably going to last twenty-five years!