I've decided to change how I do the Secret Link each week. Rather than have the repetitive "Welcome if you're a new subscriber...." open, I'm just going to make the link the first button in the newsletter. You'll see it below.

Well, the USA holiday Labor Day was two days ago. That's the traditional holiday associated with the end of summer in the northern hemisphere.

If you live in a higher latitude like I do (NH), that means you could be weeks away from cool / cold weather (WX if you do Morse code like me) and you're running out of time for outdoor projects.

I try to remind you each year that it's critical to READ the label on products so you're aware of any temperature restrictions. Some products need to cure for X hours before it drops below 32 F.

Three days ago, I had the rare opportunity to tape a video about a special flashing I had to create from a flat piece of aluminum.

If you're a new or newer subscriber, I've been working on installing a new roof all summer on my own home.

The reason it's taking so long is I can only work on it a few days a week and then if it's raining or BLAZING HOT I lose even more time. See FAR below what other thing keeps me off the roof - it's a fascinating part-time job I have each summer.

When the sun hits the DaVinci Roofscapes GORGEOUS synthetic slate product I'm using, it can get as hot as 155 F. You get burned even if you're wearing long pants and gloves.

Look at the thermal image photo I took using the FLIR ONE thermal imaging camera that works on my Android phone.

It has a feature where you turn on a cross hair, aim the center to where you want to take a temperature and it shows it on the screen. See it in WHITE just below in the photo? 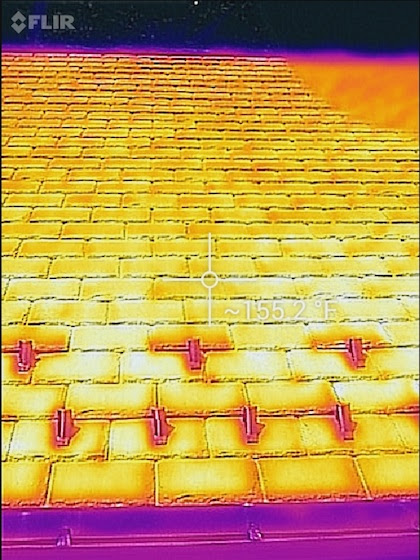 But the good news is I'm almost finished with the roof!

This new video contains a little trick that many young roofers don't know about.

Remember that one line from the movie The Lord of the Rings? It was said by Galadriel at the open of the movie:

"And some things that should not have been forgotten were lost. History became legend. Legend became myth."

That's what I'm seeing in the construction industry. Certain pieces of hard-earned knowledge about fantastic ways to do things are becoming mythical.

Well, I'm trying to do my part by taping videos, writing things on the website and here in the newsletter to prevent that. Knowledge I've discovered can be shared out into the future so you don't have to hope things will be done right at your home.

You can just come and see what my take on a situation happens to be.

What gems of knowledge do you know and what are you doing to ensure they're not forgotten? Please consider making sure that doesn't happen.

GO WATCH the video now and pay attention to the one feature of the special flashing that's rapidly becoming mythical.

If you're new to the newsletter, here's a peek at what's going on about me and my roof.

The quick story is that I bought a house in New Hampshire seven years ago. At the time, the asphalt shingle roof was only about six years old and it was in gorgeous shape. It was a 30-year shingle on a steep roof.

The steeper the roof, you usually get more life from the roofing product. Well, not in my case. The roof started to fail a little over three years ago - and this past winter it really went over the cliff.

I decided to look into it and it didn't take long to get stonewalled by the asphalt shingle manufacturers and their primary association.

Within the past two weeks, the one company that originally agreed to answer my tough questions replied with a puff piece that avoided all my questions.

At this point ALL of the major asphalt shingle manufacturers have refused to answer my questions.

What does that tell you?

I taped a SECOND video that's going to be part of a five-part series. I briefly touch on the potential issues with asphalt shingles in this video.

This fall I'm going to produce a small eBook about what I think is going on. I'll alert you when it's finished and for sale. This is one report you don't want to miss.

Here's the latest content added to the website. If you want a treasure trove of tips, THIS is the section of the newsletter you ALWAYS want to look at and CLICK EACH link.

I really share some stuff here that will save you time, money and frustration!

I'll be up on the roof again in about ten minutes then I have a dinner train tonight.

If you're a new subscriber, I'm a part-time conductor on a real train here in New Hampshire. It's a DREAM job. People would pay to do this job.