There's a big misunderstanding about how septic tanks work and whether it's a good or bad idea to add oxygen bleach to a septic tank. Let's clear the tank, er air, now about all this confusion.

Let me start by telling you up front two things: I'm a master plumber with decades of experience with raw sewage, septic tanks, municipal sewer lines and all that swirls into these systems. When I was still active each day in the plumbing business, I was a licensed master plumber for over 25 years.

Here are a few of the myths surrounding septic tanks and oxygen bleach:

Myth 1: Septic tanks are anaerobic - meaning there's no oxygen - and the bacteria in the tank THRIVE in this environment.

The wastewater has the same bacteria in it and pathogens no matter what system it enters.

The brand new septic tanks from the concrete, plastic or fiberglass manufacturing plant do NOT come with secret anaerobic bacteria loaded into to them. The tanks are clean and new.

Myth 3: Septic tanks are completely different than a municipal sewage system and that's why they're anaerobic.

FACTS: For decades jet aeration septic systems have been hidden under the grass of many homes. These systems are miniature sewage treatment plants. They were installed because the building lots were too small to support a traditional leach field.

An electric motor sits on top of the tank. A hollow shaft is connected to the motor. At the end of the shaft is a propeller. When the electric motor is turned on by a timer, air (oxygen) is forced into the tank and the propeller stirs up the sewage and ADDS the oxygen to the sludge.

The bacteria in the tank THRIVES in the presence of this oxygen and rapidly works to consume and decompose the solid waste in the septic tank.

The liquid water exiting the tank is CRYSTAL CLEAR and only needs to be treated by passing through a chlorine tablet to remove the final pathogens before flowing out on top of the soil where your toddlers play and roll in the grass.

Myth 4: Municipal sewage treatment plants perform magic on wastewater before allowing it to flow back into the rivers you swim, water-ski and boat in.

WATCH THIS VIDEO to discover the entire process of how your sewage gets treated. It's a fantastic video:

Once this liquid that's full of tiny solid waste particles has settled, it's transferred to the secondary treatment part of the plant. This is where OXYGEN is added to the sewage so the oxygen can help the bacteria in the wastewater to break down and decompose the microscopic solids in the wastewater.

The secondary treatment can be huge spray arms where the liquid waste water is pumped and allowed to drop back into the massive tank. Think of it as a giant rotating lawn sprinkler. There are other systems that incorporate huge linear waterfalls that stir up the water and add oxygen by the water splashing. Air can be pumped into the wastewater with giant bubblers.

Here's another method to add oxygen to wastewater at a municipal plant. There are many different ways to add oxygen.

This secondary treatment can last for hours or a day or two. The end result is treated water that's safe enough to dump back into the river you catch fish from and swim in. Well, that's if you trust the people working at the sewage plant and if everything is working properly.

Myth 5: Adding BLEACH to a septic tank is very BAD.

FACTS: It depends on the type of bleach you add. If you add CHLORINE bleach, that's VERY BAD. Chlorine bleach is a SANITIZER. It KILLS BACTERIA rapidly.

You want the bacteria in the tank to LIVE AND THRIVE, not DIE.

opens in a new windowOxygen bleach FEEDS AND HELPS the bacteria thrive and survive. Thus, it's a GREAT IDEA to ADD Oxygen Bleach to a septic system.

BOTTOM LINE: If you have a septic system and want to HELP the bacteria in the system, you should ADD OXYGEN to your septic tank. If you can figure a way to pump air into the sludge like you'd blow into a straw in a soda, do that. 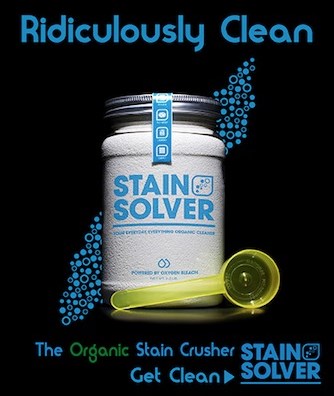 If you can't do that, then just add opens in a new windowStain Solver to your septic tank once, twice or four times a month depending on how many people are in your home.

I add one-half cup to my septic system once a week. I pour it into the toilet and flush it TWICE. It's that easy. My septic tank LOVES me.

This column was SO GOOD that I shared with the 31,000 subscribers who read my opens in a new windowFebruary 25, 2018 AsktheBuilder Newsletter.