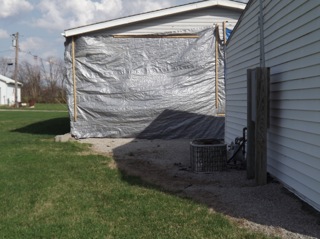 Storm Damage Help | You may have to install large tarps to stop further damage until help can arrive.

Storm Damage Help - You'll Probably Be On Your Own

AUTHOR'S NOTE: If you have a story to share about how you got no, or little help, from local agencies in a major storm, PLEASE SHARE it with me so I can post it here at the bottom of the page. Share it using the form at the opens in a new windowAsk Tim page and mention in the first sentence: "Add this to the Storm Damage Help page please." PRO TIP: Write your story using a word processing program on your computer. Then copy and paste in into the Ask Tim page.

After a bad storm, be it a hurricane, tornado, severe thunderstorm, etc. contractors and public emergency agencies become overloaded. It's the same reason roadways get clogged with cars during rush hour. Too many people want to use the same thing.

I know you need storm damage help, but the facts are you could be waiting in line for hours, days or weeks.

This is why you need a opens in a new windowstorm preparation checklist. I urge you to read about what happened to me during and after Winter Storm Gail.

Why Doesn't the Fire Department Respond?

You and your home are the least valuable asset in your community. I know you don't want to hear this, but it's true.

When a major catastrophic storm hits your area, your local fire department already has a priority list of the things they want to save or restore for the greater public good. Your home, and every other one in the town, is at the bottom of that list.

Hospitals, fuel depots, food stores, nursing homes etc. are normally at the top of the list. Once those things are protected and restored, maybe you might see a fire truck come to your home.

How Can I Prepare For Storm Damage Help?

There are two things you can do:

What Kind of Supplies Should I Have?

There are lots of other things you might want to have, but just start to think of what you might need to secure your home until such time as you can get professional help.

You are absolutely correct on this!  In late October 2011 storm Alfred hit our part of central CT really hard with about 18" of heavy, wet snow in a short period, followed by high winds.  We could hear trees snapping and falling all around our 1-acre suburban home.  Then, the worst happened:  a 90-ft oak with a 'Y' in its trunk about 25 ft up split down the middle.  One half fell across the power lines on our side of the street, but the tree had so many upper branches, it settled in the road without felling the lines, but blocking the road completely.  But, the other half fell directly on the front of our house, severely damaging the front porch, roof, and smashing open a skylight over the stairs to the upper floor (it's a front-to-back split level).  When this happened, I was on the phone with my 93-year-old great aunt, and I was right near the falling glass from the skylight - I said the "F-word"!  She, as a former Air Force commander's assistant, said, "Oh - I know something serious happened - I could hear the crash on the phone!"  And then she told me she was used to hearing such talk from AF personnel and it didn't really bother her.  So, anyhow, we hung up and after seeing the extent of the damage and having snow falling into the house thru the broken skylight, I called the Fire Dept. to see if they could help - we couldn't even open the front door because of the fallen tree.  No answer; left message, no call back.  Called the police, they said something like 'the whole town's a catastrophe' - find some friends to help.  So, I called a contractor who'd done many jobs here for us over the years - he was on his way home from S. Carolina, but promised to visit as soon as he could upon arriving home to CT. Which he did.

My wife and I spent a terrifying night downstairs in the family room  (all the time hearing large trees and limbs snapping and falling, as they still had all their leaves on which coated with the wet snow) That was after I put plastic sheeting and plywood underlay up from inside the skylight well, about 20 ft up.  Dropped my cordless drill, nearly hitting my wife.  But, it kept the water out.  Next day, outside, it looked like a war zone - thousands of trees and major limbs down on our street alone - you could not drive on it (even if there was no snow).  Our power was out 12 days; I had a small 2-kw genset as you recommend and it saved us.  Taking turns, I could power the fridge or the hot-air gas furnace, plus a few lights and the TV. Since then, I put in a 20-kw genset powered by natural gas, which we have for home heating and cooking.  Don't ask how many times it's been called into service (answer: very few).  The cleanup took months, but by the next Spring, the incident faded from memory until hiking on trails that had many fallen trees you had to clamber over.  Anyhow, good advice in your column!

Thanks for all you do, and stay safe!