Water vs Your Home – You Can Be the Winner 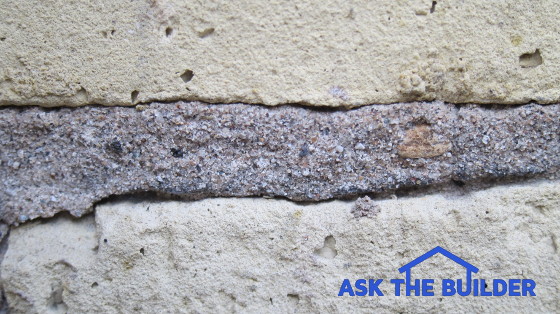 This is a closeup photo of a mortar joint between two layers of brick. Note the tiny cracks where wind-driven water can seep into the wall. (C) Copyright 2018 Tim Carter

Water vs Your Home - You Can Be the Winner

Unless you live in the Atacama Desert, you need to deal with water in and around your home. You may be one of my readers that lives in an arid climate and rain might only fall on or around you a few months of the year. However, you might be a reader that gets precipitation every month when you’re experiencing normal weather.

I’ve got a few stories to share that I’m confident will strike a chord with you. All of them originated on the opens in a new windowAsk Tim page of my AsktheBuilder.com website. Each spring the number of messages I receive about wet basements, crawlspaces and soggy soil in the yard goes way up.

As an illustration, allow me to share with you the help request from Sara who lives in the greater Washington DC area. A few weeks ago, a horrible Nor’easter caused water to leak over her basement wall. She described it as a miniature Niagara Falls.

Sara lives in a brick-veneer home that’s only thirty years old. She has only been in the home for a year and has never had a leakage issue before the storm. As you might imagine, she was quite distraught.

I explained to Sara that the ferocious storm lashed her house with wind-driven rain. The force of the wind coupled with the weight of the water crashing against her brick walls drove water through the brick/mortar interface much like you’d hammer a nail into a soft piece of balsa wood. That water then ran down the back of the brick and found a way inside her basement.

The builder and bricklayer who built Sara’s home didn’t install the proper flashings and water-containment membranes to deal with this water. It’s a known fact in the industry that brick walls leak water. I shared with her a clear water repellent and a secret method to apply it that should stop almost all future water from leaking into her home.

A man in New Jersey landed on my Ask Tim page and was desperate. He’s building a new home and the same storm that pummeled Sara caused his basement to flood. The builder had yet to install the sump pump and all the water that cascaded down from the roof soaked into the fluffed up soil around the foundation.

The photos the homeowner sent me were distressing. The water that poured into his basement through the sump pit was filled with silt. The floor and walls were coated with the brown film. I pointed out that if the builder had installed a deep layer of straw or a layer of felt paper on top of the gravel that covered the foundation drain tile the silt would have never made it into the basement.

Backfill soil around new homes gets fluffed up and water flowing into the soil transports the small silt particles until such time as it hits a filter, barrier or the soil self-compacts. If the silt is not stopped, it can clog the gravel covering the drain tile and in the worst case, clog the drain tile.

The homeowner is going to dig a test pit along the foundation to see what happened. It’s possible the foundation was not waterproofed and the drain tile was not installed correctly.

Finally, I heard from Erica who lives on the West Coast. She’s dealing with a few issues, not the least of which is water that drips from her roof and splashes up onto her wood siding. She also told me when there’s a heavy rainstorm water flows overland down the hill behind her and hits her back wall.

Gutters at the bottom of roofs are a great way to minimize water issues on a home. A one-inch rainstorm drops about 1,870 gallons of water on the roof of an average three-bedroom home. Gutters and generous roof overhangs can prevent wood siding from rotting because of all this water.

The overland water that hits up against Erica’s home can be prevented by ensuring the top of the foundation or house slab is high enough so the ground around the entire home can be sloped away from the surrounding natural ground. All too often builders put houses too deep into the ground causing drainage nightmares.

This creates a swale or trough so water doesn’t come crashing against the house. It’s important to realize these dimensions are MINIMUM standards. It’s best to have more fall so water never runs up against the foundation.

I’ve created a free downloadable document that has the sealer Sara needs, a hand drawing of how drain tile and gravel should be installed along a foundation, a drawing of how high to place a foundation or slab to prevent flooding and lots of links to other helpful stuff you need to keep your home DRY.

Just go to: opens in a new windowB1239opens PDF file to get the free PDF document.