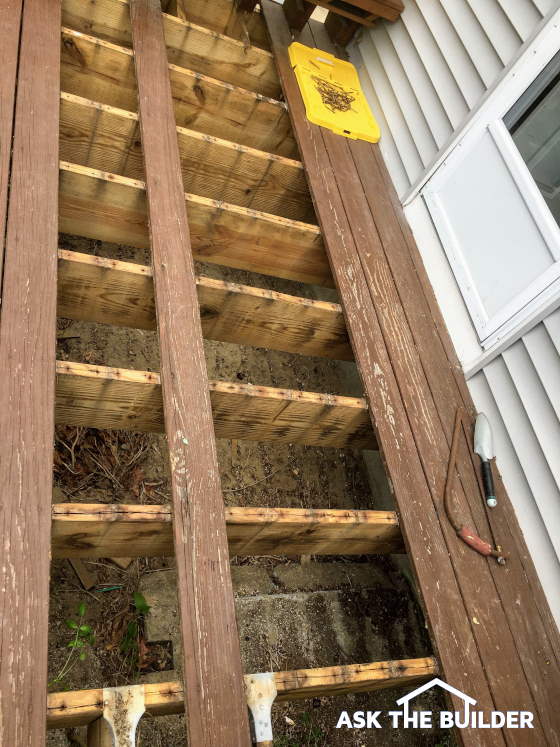 Restore Old Deck | Can you believe the size of the cracks in the top of these treated lumber deck joists? They were hidden by the deck boards that were removed. Get your FREE deck repair parts list before you start the job. Copyright 2020 Tim Carter

DEAR TIM: I’ve got a nine-year-old treated lumber deck on my home that’s showing worrying signs of decay. I removed some of the deck boards to discover some of the 2x12s are rotting at the top and there are huge cracks running along the top edge of each joist. Should I replace the entire deck and start over? Is there a way to salvage what I have? If you were here helping me, how would we make it so the deck would last thirty or forty years? Jeff Y., Upton, MA

Nine years old!!! I know this really dates me, but I can clearly remember the first time I saw an in-store marketing piece for treated lumber. I was fresh out of college and had just started my own remodeling business.

I was at the sales counter of a local full-service lumber company. This was four years before the orange major big box store was even a glint in the eye of its founder. There on the counter was a color cardboard placard that introduced treated lumber with a LIFETIME GUARANTEE. I marveled at that and took it hook, line, and sinker because I had yet to have enough life experience to know better.

I’ve since come to realize that some marketing managers for manufacturers live in a world populated with unicorns, rainbows, and glitter. Some also distort the English language and make a play on semantics. Rhetorical question: “Who’s lifetime?”

Here’s the truth. Treated lumber can and does decay. It can and does crack. Water is its enemy. Let’s do an autopsy on Jeff’s nine-year-old (gasp!) deck hoping that you can avoid his pain, his upcoming labor, and possible expense.

Treated lumber is a magnificent material when you think about it. It used to be treated differently decades ago when I first bought it, but the EPA decided that the heavy metal chromium was not such a good idea in your life. Today’s treated lumber that you see at the home center and lumber yards contains lots of copper, a very good natural biocide.

But the core issue with treated wood is it’s hygroscopic. This means it changes its shape and size in response to the presence of water. If you have a piece of older treated lumber you can do a fascinating experiment. Set the piece of lumber out in the sun and allow it to become dry as a bone. Once dry, drop a small amount of water on it. Look closely and you’ll see the water soak into the lumber. Therein lies the problem.

The water causes the lumber to swell. As the wood dries, the lumber now shrinks. This back and forth movement causes tension within the lumber and micro-cracks start to develop. After repeated wet/dry episodes, the cracks grow to where you can see them. These are called checking cracks. These cracks allow the next rainfall to penetrate deeper into the wood causing even greater tension forces. The cracks grow bigger and bigger.

Rot can happen for any number of reasons. When you purchase the treated lumber, you hope that the chemicals used were the right proportion. You hope the pressure vessel the lumber was in was working right. You hope the pressure gauges were accurate. You hope the operator didn’t have a fight with his wife or boss that day. Hope is something you should reserve for things you can’t control like the weather and if you might get rescued from a deserted island.

If I could help Jeff rebuild his deck, here’s where I’d start. First, I’d buy my lumber from a true lumberyard, not a home center. You can get different grades of treated lumber and I prefer #1 if I can get my hands on it. All I ever see at the home centers I visit is #2.

I’d be sure to use the absolute best metal framing connectors and fasteners that have been rated for use with modern treated lumber. Remember, today’s treated lumber has a very high concentration of copper in it. Once treated lumber gets wet, a chemical reaction begins and the iron loses this battle. Many a person has been injured or killed in a deck collapse caused by the corrosion of the fasteners.

Once the undercarriage of the deck was complete, I’d cover the top of all the joists as well as the tops of any beams with the newer joist tape meant for this purpose. This tape seals the top of the joists and beams and minimizes the chances of water entering the lumber. It’s important to realize that when you drive a nail into the top of a treated lumber joist you create stress points that eventually result in cracks around the nail shaft. The cracks allow the wretched water into the lumber with the above-mentioned ill effects. The tape is designed to seal around the shaft of a deck nail or screw.

Jeff might be able to salvage all his current lumber. He may be able to flip the joists over. The issue might be that he’ll have to trim the lumber ever so slightly in case the joists are crowned. A crowned joist has a hump in it much like bridges you drive over. Crowns should point skyward. If you flip a crowned joist over, now it has a dip in it that can cause water to collect on the deck. You need to snap a chalk line and cut out the dip.

I’d purchase some liquid copper naphthenate and brush it on any of the joists where the rot is less than 5 percent of its overall width. Joists with more rot than this should be replaced in my opinion.

One Response to Restore Old Deck