The key to understanding how the system works is knowing that there is a vast quantity of air in the upper horizons of soil. In addition, we know that gravity will pull water downslope. Furthermore, water will absolutely take the path of least resistance. It will flow down through the gravel and into the pipe much more readily than force its way past soil particles!

The French drain system will work wonderfully even if the pipe is installed dead level. It will not work if you install the pipe so that it slopes uphill. If your lot goes up and down, you will have to use a builders level or laser to set the pipe level or with a slight down slope pitch. If you pitch the pipe, 1/8 inch per foot of fall is sufficient. Of course if you want it to slope more than 1/8 inch per foot, that would not pose a problem!

The trick to the whole system is providing a means for the end of the French drain system to "daylight" or expose itself on the lowest portion of your lot. This is where the collected water will discharge. You can often disguise this pipe exit point with decorative gravel, boulders or large rocks. You may also want to plant vegetation that likes to have its feet wet! Anything will look better than a simple pipe sticking out of the ground.

Interconnecting 4 inch perforated pipe in a simple grid work will work well to drain a back or side yard. The system of pipe works like a maze in reverse. Water enters any of the pipes in the maze or system. One of the pipes in the maze continues around the house or the yard to a low spot. The water flows from the soil into the pipes and finally exits at the end of the pipe. Yards equipped with this system will drain in hours, not days!

The grid work of piping is installed exactly as the simple French drain. Gravity will literally pull the water from the soggy soil directly and rapidly into the grid work. Trust me, these systems work and they work very well. 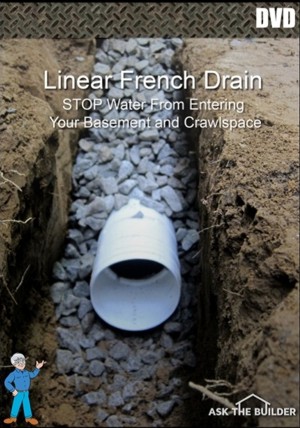