The past three days here in New Hampshire did a good job of erasing the foul memories of the long and bitter winter. The crystal-clear blue skies, temperatures kissing 80 F and a dew point in the lower 50 F range made for delightful days.

I heard the loud crunching sounds of metal against rock through the forest above my house on Monday. It was VERY CLOSE. 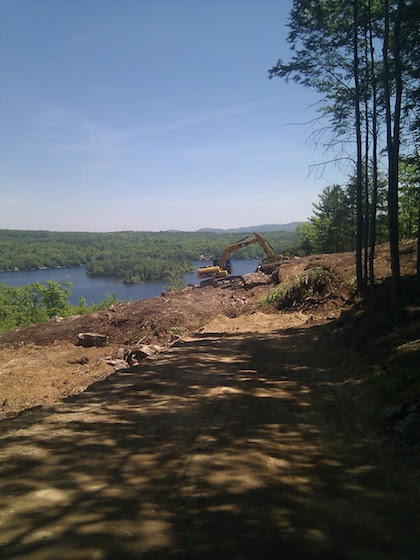 On my way to town to mail lots of the opens in a new windowsample size Stain Solver to customers, I stopped by to see what was going on. As you can see above, the large excavator was grubbing a lot getting it ready for the next contractor.

That person will be bringing boxes and boxes of TNT or similar explosive. Let's hope he does it right and no boulders come tumbling down on my family and house!

Someone is getting ready to build to take advantage of a spectacular view to the east and north just above my house. But they bought a lot that had perhaps one foot of topsoil on it at the most.

The continental glaciers that spread from the North Pole down to and over Cape Cod just 15,000 years ago scraped off everything from the tiny mountains behind my house. Although Mother Nature does her best to create new soil on top of the mountains, it succumbs to her gravity quite fast.

Why am I telling you this? I want you to think about what kind of extra cost you'll be incurring if you choose to build at the top of a hill with a vista. In most cases, you might have to blast bedrock to build and install utilities.

Before you get all dreamy eyed and put in an offer to buy a lot like this, STOP and reach out to high-quality custom builders in the area. Believe me, they'll know the lot conditions and they'll be able to give you an idea of the extra money you'll have to spend to get the lot to where they can build.

Tip of the Week - House Wrap vs Vapor Barrier

Do you know the difference? Do you need both? Why? Why don't houses built in 1920 and earlier have more wood rot and mold than modern houses?

I answer all that and more in a column I just wrote. Janice from Georgia was the inspiration. opens in a new windowREAD IT NOW. 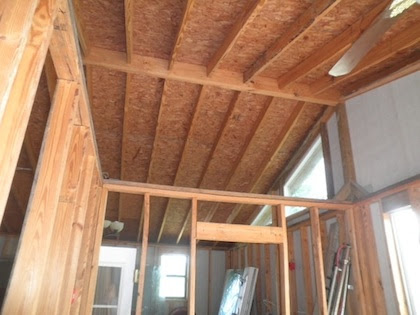 Your dad will love this gift. Or if you're a dad, you better start dropping this hint right now.

Watch this video and see if you can't imagine your power miter saw sitting on this stand. Just about EVERY model miter saw - no matter the BRAND - will fit on those two teal-colored supports you see in the video. opens in a new windowWATCH THE VIDEO. 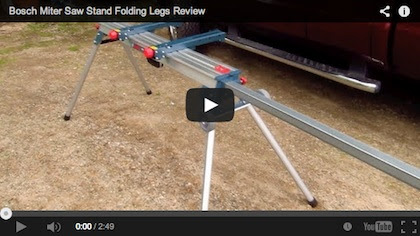 Wow! You're interested in paint! Nearly 1,100 people took the time to opens in a new windowdo the survey. That's an astounding result. Thanks for doing it.

As promised, I said two people would be picked randomly courtesy of the random number generator at Random.org.

Bill Campbell and John Rase - come on down! Congratulations, you each have won 5 gallons of Behr's superb Marquee exterior house paint.

If all goes well, I'll be answering in the near future many of the questions you asked me in the survey.

Two years ago, I started a fairly extensive test of exterior decks stains. I chose to try the products on both treated pine and cedar deck boards. Both are very popular.

Yesterday I took photos of the sample boards that have been out in constant weather since May of 2012. 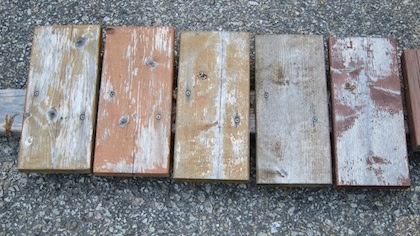 You'll note that there are only a FEW of the wider cedar boards in the photos. The reason for that is simple. After one year, the boards you DON'T SEE had already COMPLETELY FAILED. I only put the boards back out to the weather that still looked pretty good.

opens in a new windowCLICK HERE to see what's going on after two years. The results will put your head on a swivel.

opens in a new windowMore Tips Next Week!